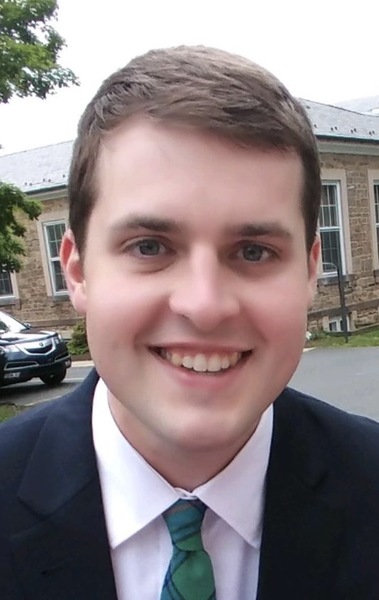 Rev. Ben Shaw officially began his ministry here on August 1, 2017.  Actually, he began serving on the Sunday prior to that as far as the congregation is concerned.

Rev. Ben first met us in June when he was voted on by the congregation.  Obviously he was well received.  Rev. Ben provided the following bio before his June visit, and he commented that we were free to edit it.  Nope--we liked it just the way he wrote it!

Ben Shaw is a life-long Ohioan and Presbyterian.  Growing up he was active in his home church, First Presbyterian of Delaware, a place where he spent years asking too many questions and talking through choir practice.  At Ohio State he joined the Presbyterian Campus Ministry, studied Political Science and French, and mostly ignored his looming call to ministry for as long as he possibly could.  After college he spent a few years loafing around Columbus before packing for the East Coast and Princeton Theological Seminary, where he promptly got involved in everything that would have him.  Though this will be his first call, he’s done a little bit of everything the church has to offer—work with youth and adults, campus ministry, hospital chaplaincy, and administration.

When he isn’t in churches, Ben enjoys napping and watching TV.  Sometimes he goes to the gym and reads books.  His interests at the moment include getting a dog, travel, and podcasting.

Of himself he says “I promise I’m more interesting in person.” He looks forward to meeting everyone at OPC very soon.

Many thanks to OPC's Session/Search Committee for their amazing efforts in finding Rev. Shaw.

Amy Remaklus is an aspiring Inquirer supported by the Ottawa Presbyterian Church.   This is the beginning phase of ordained ministry in the Presbyterian Church, U.S.A. Amy has felt the call into ministry since she was a small child.  However, there have been many twists and turns in her journey.  When she was younger, Amy attended CCD classes (in the Catholic church), participated in a Christian Leadership Program (in the Catholic church), and even considered entering the Catholic convent.  Amy was raised in the Catholic church but was introduced to Protestantism during college.  Toledo Campus Ministries, Habitat for Humanity, the Office of Residence Life, multiple mission trips and service projects, and many different nursing experiences opened Amy’s eyes to the world of love and teaching that is embraced by the Protestant tradition.  Amy learned that God was calling her into ministry in a different way than she had previously thought.

Now, 10 years after college,  Amy is married to her college sweetheart, Jeff, and they have four beautiful daughters.  Amy has been ministering to the community and her family for the past 10 years in many ways:  as an ICU nurse both locally and traveling, as a mother and home educator of four primary school-aged children, as a Girl Scout troop leader, as a Sunday School and Junior Church leader, and many other unmentioned roles.  Amy cares deeply and passionately about the community and the world.  This summer, Amy and her family will be relocating to Georgia, where Amy will be attending classes at Columbia Theological Seminary for the next four years.  The entire Remaklus family (children included) is very excited about this adventure!  Please keep this mission-oriented family in your prayers, as they embark on this challenging next step of answering God’s call:  Moving to a new state with four small children, continuing home education for the four children, starting graduate school after 10 years of being out of college, and Jeff’s starting a new nurse practitioner job in Decatur, Georgia.

Thank you for your prayer support!

Other Church leaders
In every Presbyterian church, there is a group called the "Session" which is composed of "elders."  Together with the pastor, this group oversees all church programs and activities.  OPC's Session has six elders, with each elder serving a three-year term.  Every year, two new elders are chosen by the congregation to replace those elders whose terms are completed.

Our current session members are listed below.
Class of 2020--Paul Baransy, Brandon Font
Class of 2021--Robyn Badder, Ashley Roberts
Class of 2022--Karl Hirzel, Nancy Kaufman.  Welcome to Karl and Nancy whose terms begin officially in January 2020.
Thanks to elders Jane Doepker and Chas Myers who finished their terms in December 2019.
Many thanks to all of the elders and officers who have served through the years!
Committee Chairs:
Church Operations--Brandon Font
Education--Robyn Badder
Fellowship--
Mission & Outreach--Paul Baransy
Worship--Ashley Roberts
Clerk--

Our church secretary is Andrea Mormon (secretary@ottawapresby.org).  She began her work in early December, 2010.


We are a small church whose members come from a wide variety of backgrounds.  No... (more)